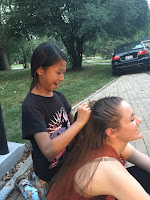 Adoption can be a wonderful thing.  My niece, in this picture, is adopted and she is a wonderful addition to our family.  However, adoption can have some funky applications in the estate planning world.  A recent ruling from the Iowa Supreme Court was interesting on a couple of issues involving an adoption:
The first point is not all that unusual and I have advised clients of this very option.  Basically, whether you are adopted or biological, as a child in Iowa, you do not pay any inheritance tax when you inherit from your parents.  But, if you are a nephew, cousin, friend (basically a non-lineal descendant) there is an inheritance tax owed on an inheritance based on this table.  So, if reducing a tax bill is worth changing your heritage, you can be adopted by someone (even though you are an adult) and escape that pesky Iowa inheritance tax.  So, whether it is a friend, nephew/niece, cousin, attorney...stop by that friendly adoption attorney's office and do your tax planning as you enlarge your family.  Many clients find this tax plan "amusing" and don't take that step.  However, here is a clear example demonstrating its real-life application.

The second point is for a little more on the advanced side.  One of the trade-offs of getting adopted is that once you are adopted, you are normally cut-off from adopting from your biological side.  So, if your rich aunt adopts you, and then the next month your mother wins the lottery and dies from a heart attack, you don't get to share in the lottery winnings as you are no longer your mother's child.  (You are your aunt's child, essentially, and you can only have one set of parents.  Mom becomes your aunt and your aunt becomes your mom.)

Moral of the story: You can have your cake and eat it, too.