Gardner Law Firm, P.C. has its fully completed website up and operational at this point.  Want to know more about me?  Now you can find out.  Thanks to LawPromo for their good work!

Email ThisBlogThis!Share to TwitterShare to FacebookShare to Pinterest
Labels: annoucements

Estate Planning - Regardless of Age 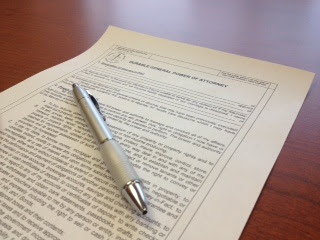 A local news story helps provide another sad example of why it is important to establish some basic estate planning, regardless of your age.  A young lady was involved in an automobile accident that has left her in a coma and unable to deal with her personal affairs.  As a result, her friends and family are struggling with the financial restrictions of getting access to her accounts to deal with various matters.

Two relatively simple documents-Financial Power of Attorney and Medical Power of Attorney-would have made this job much easier and cheaper.  The cost for getting these basic and essential documents in place is minuscule when compared to having to go to court to establish a guardianship and/or conservatorship for someone in this situation.  Commonly younger individuals don't realize the need or importance for such documents as they are young and immortal, or believed to be less likely to have a need for these provisions.  Unfortunately, that isn't always true.  (One minor correction to the news story: a Living Will is not the proper title for the document needed here, but rather the power of attorney documents noted.  A Living Will is the "pull the plug" declaration for end-of-life decisions.)

Thoughts and prayers to her friends and family as they seek to help her out.  Please consider helping this young lady out.
at February 25, 2013 No comments:

Email ThisBlogThis!Share to TwitterShare to FacebookShare to Pinterest
Labels: living will, power of attorney

How to Dispose of a Dead Body in Iowa

The Iowa Supreme Court issued an interesting ruling today on the disposition of one's bodily remains.  Short summary: Wife dies.  Husband and wife were "on a long break" after 43 years of marriage, but had never formally divorced or filed for a legal separation.  Wife had given instructions in her Last Will as to where she wanted to be buried, verbally told her family members (10 kids!!) and wrote a letter to her son, that was shared with her sister, the executor and the kids about her final wishes.  Husband didn't want wife to be buried in Montana, as she desired and expressed to everyone, so he went ahead and buried her here in Heaven a/k/a Iowa.  Royal rumble in the courts ensued.

Think you have the right to determine what happens to your body after you have "departed planet Earth"?  Unless you take your body with you, guess again.  In the Court's ruling, you have no rights whatsoever as to what happens to your bodily remains.  Iowa Code § 144C.5 which was amended a few years ago, is titled "Final Disposition of Remains - Right to Control" sets out the chain of authority over the individuals that can make that decision.  The deceased person is not on the list.

Thus you, as the dead person, have the right to determine who makes the decision but not actually the decision yourself.  (I.e., buried, cremated, shot into space, sprinkled around the farm, etc.).  Also, don't put those instructions in your will.  I never recommend that in the first place as your will may not surface until it is too late, plus the Court clearly stated that placement in the will isn't compliant with the Iowa Code.  (Justice Cady, whom I believe is one of the premier judicial minds in our courts, issued a strong and rationale dissent that is worth the read.)  And if you don't designate anyone, the Code provides that your spouse is the sole decision-maker (just like in my house), followed by your adult children, and so forth.

I often get a chuckle from clients when I bring up this topic in the estate planning meeting, but this ruling reinforces the value of making plans to cover all of your matters: financial, family and remains.  Moral of the story: Pick the person that you trust to make decisions about your remains, and follow the requirements with including that choice with your durable power of attorney document.
at February 22, 2013 No comments:


powered by Fotopedia
With today's medical bio-technology, it is not unusual for a couple to "store an embryo", or other "genetic material" for future use.  Perhaps they had multiple embryo's created, or they are going through a medical treatment which may affect their reproductive capabilities, or heading to war.  Regardless of the reason, the legal issues that can be raised with such foundations of life are interesting. For example, if a baby is eventually born as a result of the "stored genetic material" and the parent dies before they are born, what rights as a child/heir do they have?

The Iowa Code was modified in 2011 to provide a window of opportunity for an unborn to have rights of inheritance following the death of the parent.  Essentially, if a child is born within two (2) years after the death of a parent, they can inherit from that parent just as if they had been born prior to the parent's death.  If a deceased has left any genetic material, the personal representative of the estate must report that fact to the court and also leave sufficient assets for that potential person to receive their inheritance.

While it is possible that an embryo, or other material, can be frozen much longer than two years, the two year window was used merely to provide some reasonable period time and not to keep it indefinitely   Medical advances certainly create some interesting legal scenarios.
at February 10, 2013 No comments:

Cheated Out of an Inheritance? Better Stay on Your Toes If You Want to File a Lawauit.